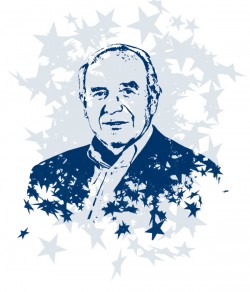 Mr. Mitchell is a distinguished lawyer, committed volunteer and thoughtful philanthropist who has helped many community organizations, but outstanding among these efforts is his long-time support of amateur sport in Canada, and university athletes in particular.

Mr. Mitchell played varsity football at UBC, going on to play professionally for the BC Lions while still studying for his law degree. After graduating, he worked as an articling student at Howard Mackie, then a firm of seven lawyers. Today he is national co-chair of the successor firm, Borden Ladner Gervais, the largest law firm in Canada with more than 750 lawyers and 1600 employees.

During his legal career, Mr. Mitchell took a leave of absence to become commissioner of the CFL (1984–89). He has lent his strategic leadership to many other sport or commerce-related organizations, including the NHL and the Alberta Economic Development Authority. Other organizations to have benefited from his guidance include Calgary Sports Tourism Authority and Calgary Airport Authority.

Mr. Mitchell remains a proud advocate for Canadian football and is co-owner of the Calgary Stampeders, but has never forgotten his varsity roots. He founded the prestigious BLG awards in 1992, which not only honour Canada’s top male and female student athletes but also provide them with $10,000 scholarships to attend graduate school. He has chaired the organizing committee for the annual Shrum Bowl football game between UBC and SFU, currently serves on the UBC Board of Governors and the Thunderbird Council.  A lead donation towards the Doug Mitchell Thunderbird Sports Centre enabled UBC to serve as a host venue for the 2010 Olympic and Paralympic Winter Games. Mr. Mitchell’s contributions to sport were honoured with the re-naming of one of the CIS semi-final games, now known as the Mitchell Bowl.

Mr. Mitchell ‘s contributions have been recognized with many honours including the Order of Canada and the Alberta Order of Excellence, and he was named one of the Power 50 of Canadian Sports by the Globe and Mail.

Mr. Mitchell and his wife, Lois, who also attended UBC, have four children – Shelley, a lawyer in Vancouver, Steven, involved in the import brokerage business in Toronto, Sue Anne, in the arts in Vancouver and Scott, president of the Hamilton Tiger-Cats football team.