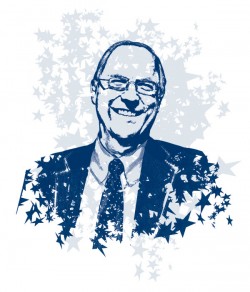 Born and raised in Kelowna, Paul Mitchell has played an integral part in his hometown’s remarkable growth over the last few decades. He is a tireless community volunteer and leader whose strategic initiatives and involvement in dozens of socially-oriented organizations have helped to create a vibrant and connected city.

Believing in the value of education and the untapped potential of his region, Mr. Mitchell co-founded the U-2000 Society in 1996 to lobby for the creation of a full-status university in Kelowna. The group’s efforts were rewarded with the establishment of UBC Okanagan in 2004. He continues to support the university through his role on the Capital Campaign Cabinets for the university’s start an evolution campaign; as an advisory board member of the Faculty of Management; and through his years of service as an Alumni Association board member. He was selected by a committee of local alumni to receive the 2009 Okanagan Alumni Community Builder Award.

Mr. Mitchell has held leadership roles in nearly 40 organizations including the Kelowna Chamber of Commerce and Kelowna General Hospital.  In 1998 he headed the Central Okanagan United Way Campaign, for which he was recognized with a Local Hero Award. In 2004, when the region was still reeling after a major mountain fire, he gave it a much needed boost by successfully pitching Kelowna as host for the Memorial Cup. He also headed the Okanagan Innovation Fund, which exists to encourage investment in the region’s future.

Mr. Mitchell is a partner of the law firm Pushor Mitchell LLP, which was named Kelowna Corporate Citizen of the Year in 2008. His practice specializes in personal injury with an emphasis on brain and spinal injuries. He has gained a reputation as a tenacious advocate for his clients and for trauma victims in general. Mr. Mitchell was a director of BrainTrust Canada for more than 20 years, supporting the organization in its early years by providing office space and initiating programming to provide free services to those living with brain injury.

Mr. Mitchell’s outstanding contributions have been recognized with numerous awards over the years, most recently the 2012 Kelowna Chamber of Commerce Honorary Life Member Award.