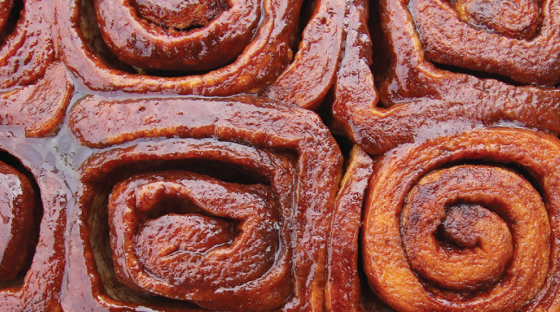 In 2018, Trek brought you stories about psychedelics, ornithology, smart cities, and lunar expeditions. It also featured Q&As with Dr. David Suzuki, national news anchor Robin Gill, and internationally-renowned tenor Fraser Walters. In the end, however, Trek‘s most read story of the year was about a sweet, sticky treat at the heart of many alumni memories. We hope you enjoy this look back at Trek‘s top stories of 2018.

Nearly 65 years of UBC alumni remember the pillowy softness and caramelized edges of the UBC cinnamon bun as a quintessential part of their university experience. But where did it all begin?

Graduating classes used to pay their respects at a local cemetery.

On the Fast Track

The hectic life of a Formula 1 engineer.

In 2018, we also witnessed the power of sharing

On May 2, 2018, a car was found dangling from a bridge in Toronto during rush hour and comparisons were quickly drawn in the national and international media to the UBC Engineers’ infamous Volkswagen Beetle pranks. A story detailing the UBC prank, which appeared in the pages of Trek back in 2015 (as well as in Maclean’s back in 2007), was shared on Reddit and led thousands of readers from the US, UK, and around the world to the Trek site over the course of two days.

I prank, therefore I am

UBC engineering students are known for their elaborate pranks and also for being stubbornly tight‑lipped when asked to talk about them. In 2007, writer Erin Millar came closer than most to getting the inside scoop on one of the most ambitious student pranks ever attempted.

Whenever you read Trek stories that fascinate, motivate, or move you, we encourage you to share them with your social networks. We also want to hear what you think about the magazine. You can send us letters to the editor or ideas of stories/topics you would like to see featured in Trek in 2019 to trek.magazine@ubc.ca.