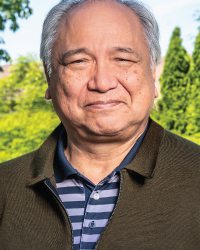 The Honourable Steven Lewis Point is a double alumnus of UBC and retained close ties with the University after receiving his Bachelor of Laws in 1985.  Mr. Point served as director of the First Nations Legal Studies program at the Peter A. Allard School of Law from 1991 to 1994.  He was awarded an honorary Doctor of Laws degree in 2013 for his exceptional commitment in the field of law, legal and Aboriginal education, and his leadership in the Indigenous community.

In addition to his role as the 28th Lieutenant Governor of British Columbia, Point’s career included practicing as a lawyer, working at the Union of British Columbia Indian Chiefs and in the Department of Employment & Immigration, serving as a provincial court judge and the Chief Commissioner of the British Columbia Treaty Commission, and chairing the advisory committee that worked to implement the recommendations from the Missing Women Commission of Inquiry.

Mr. Point is a member of the Skowkale First Nation and has advocated for Indigenous people throughout his career, pressing for greater recognition of their contributions and their fuller involvement in all aspects of life in British Columbia.

Mr. Point is a recipient of the Queen Elizabeth II Golden and Diamond Jubilee Medals, the Order of B.C, the Joseph H. Cohen Award from the Justice Institute of British Columbia Foundation, a National Aboriginal Achievement Award, the Order of Chilliwack, and honourary Doctorate of Laws degrees from the University of the Fraser Valley and Capilano University.