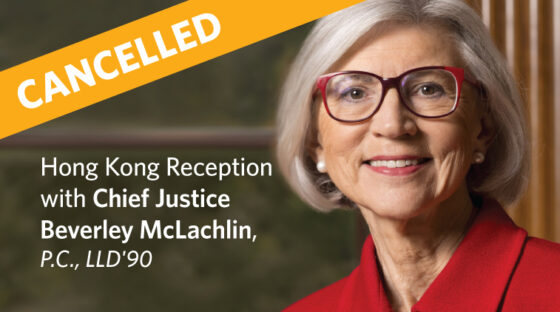 This event is hosted by Mr. Victor Yang, LLB’70, BCom’72, Member of The Allard School of Law Dean’s Advisory Council and Member of the Hong Kong Club.

Join fellow UBC alumni and friends in Hong Kong for a special evening reception with the former Chief Justice of the Supreme Court of Canada, Beverley McLachlin, P.C., LLD’90. This is a very special opportunity to hear from one of Canada’s most prominent figures as she shares stories from her personal journey. We will also hear from Professor Hoi Kong from the Allard School of Law at UBC.

Presented in partnership with

Cancelled – we are postponing this event until next year.

Beverley McLachlin was the Chief Justice of the Supreme Court of Canada from 2000 to 2017. She is the first woman to hold that position and the longest-serving Chief Justice in Canadian history. Born in rural Pincher Creek, Alberta, McLachlin studied philosophy and law at the University of Alberta before being called to the bar in 1969. After teaching at the University of British Columbia, she was appointed a judge in 1981. Throughout her prestigious career, she has served on many courts, including the County Court of Vancouver, the Supreme Court of British Columbia, the British Columbia Court of Appeal, and the Supreme Court of Canada. In 2019, McLachlin became a Companion of the Order of Canada, the highest honour within the Order. Her first novel, Full Disclosure, was an instant national bestseller.

Are you living in Hong Kong but not receiving event invitations? We may not have your current address.