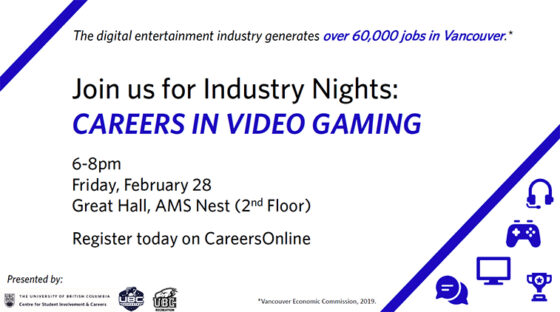 Did you know that the Canadian video gaming industry in Canada has grown by over 20% since 2017? There are almost 700 gaming studios producing games of all varieties in Canada today, and of those, over 80% of those are in BC, Ontario and Quebec.

This industry supports over 48,000 full time roles in the country, which tells us there is a huge opportunity not just in work directly related to game development, but in non-technical roles as well. But with rumors of the feared “100 hour work week”, and deadline after deadline, is working in gaming all is it cracked up to be? Come find out as we discuss the good, the bad, and the unexpected at Industry Nights: Careers in Video Gaming.

Presented by UBC’s Centre for Student Involvement and Careers, UBC Esports, and UBC Recreation, with support from alumni UBC.

Light refreshments will be served.

With her computer science background and time spent cheffing on the yachts of Monaco, Christi Rae has spent her career bringing together the artistically minded and technically savvy to create something from nothing. This has manifested itself in a string of AAA franchises for the likes of Sega, Disney, Electronic Arts and Microsoft.

Christi is currently the Director of Production for Microsoft at The Coalition, who develop the Gears of War franchise.

Heidi has a lengthy history with the Vancouver game development scene, having worked at Radical Entertainment for a stretch in the mid-’90s and following that with an 11-year run at Electronic Arts Canada where she served as senior development director and helped ship games like SSX 3, NHL Rock the Rink, and FIFA Street.

Tim is the Director of Esports at the Canucks Sports and Entertainment Group, overseeing the Vancouver Titans in the Overwatch League and the Seattle Surge in the Call of Duty League.

Dominic is General Manager at Nintendo of Canada and Board Member – Entertainment Software Association of Canada.