Every wine is unique. Distinctive qualities are often attributed to terroir – how the wine’s flavours and characteristics are expressed through the soil, location and climate. How do vineyard managers and winemakers make the most of their specific terroir? In what ways do the unique and diverse micro-climates and regions of the Okanagan and Similkameen influence the wines made here? To what extent are distinct qualities of wines attributed to terroir? And how can we taste the difference terroir makes?

Following the dialogue, our wine experts will take you through a guided tasting of some of the Okanagan’s finest VQA wines to help you better understand the importance of, and the award-winning taste of, the Okanagan terroir.

Presented in partnership with the Wines of British Columbia

Photography at this event was by Freestone Spirit Photography. 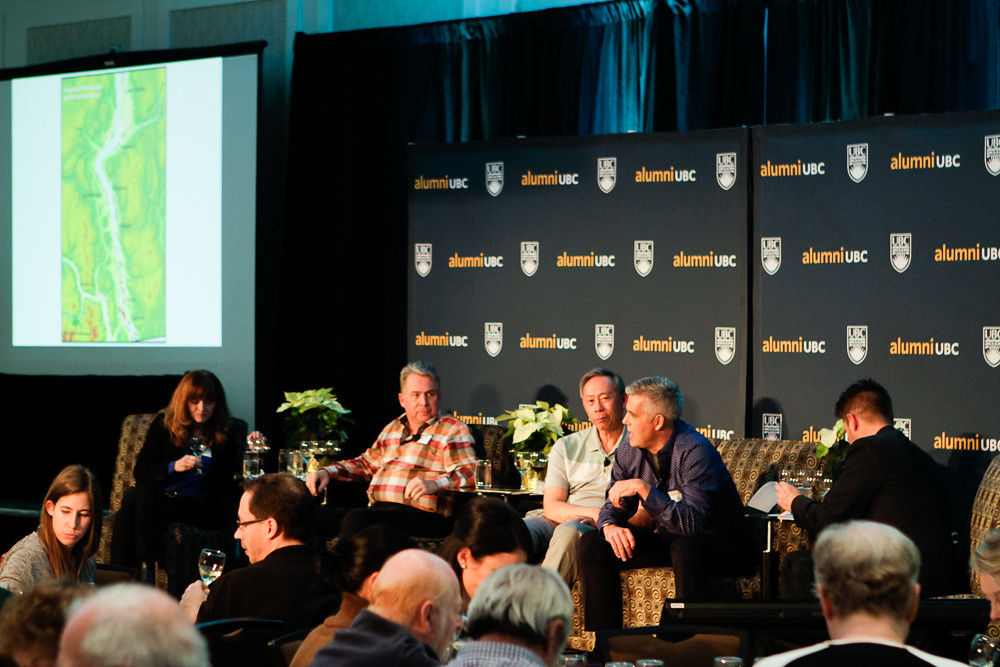 Chris Walker is the host of Daybreak South on CBC Radio One. Originally from Galiano Island near Victoria, Chris lived in New Brunswick, Ottawa, Prince George and Cairo, Egypt, before moving to the Okanagan in 2010.  Chris won a 2015 national journalism award for feature reporting. Chris lives in downtown Kelowna.

Born in 1952, Howard Soon was raised amid the 1960’s culture of Vancouver’s quintessential neighbourhood, Kitsilano. He studied Biochemistry at the University of British Columbia and Business Administration at the University of Manitoba. After five years at Labatt Brewing Company, Soon moved to the Okanagan in 1980 to begin his winemaking career.

In 1997, he was handed his most prestigious assignment – Sandhill. Soon works closely with grape growers from our vineyards to handcraft the award-winning single vineyard wines with minimum intervention.

“At Sandhill we appreciate that great wine begins in the soil and on the vines, with grapes that have been nurtured to balanced ripeness,” says Soon.

His determination to be at the leading edge of winemaking and working with the best grapes in the Okanagan have become fundamental to Sandhill’s exploratory Small Lots Program. Soon is one of a select group of certified wine educators in Canada and is a much sought-after speaker. He is an experienced judge of wine and has served on the panels of several major wine competitions in Canada and the US. In 1998, Soon received the Founder’s Award from the Okanagan Wine Festival, recognizing his contribution to British Columbia’s wine industry.

Pat Bowen is an UBC alumna who completed her PhD in Ecology and Viticulture at the University of California, Davis.

Dr Bowen is a plant physiologist and viticulture researcher at the Pacific Agri-Food Research Centre (PARC) in Summerland and an Adjunct Professor in the Irving K. Barber School of Arts and Sciences at UBC Okanagan. Her research is directed towards understanding vineyard ecology and the interactive effects of terroir and cultural management on grape and wine quality.  She led the development of a geographic information system to characterize terroir in the Okanagan and Similkameen valleys.

Her areas of expertise are;

Gordon Fitzpatrick is President of Greata Ranch Reserve Winery which is currently being re branded as a Sparkling Wine House.  This exciting new 8,000 case boutique winery, located near Peachland scheduled to re open by June 2016, will specialize in Sparkling Wine but will also produce Chardonnay, Pinot Blanc, Ehrenfelser, Riesling, Gewürztraminer, Rosé and Pinot Noir.

Gordon is former Co-Proprietor and President of CedarCreek Estate Winery (sold to Von Mandl Family Estates on February 3, 2014), which was twice named Canada’s Winery of the Year at the 2002 and 2005 Canadian Wine Awards.  He was responsible for the operation of four vineyard sites totaling 150 acres of premium vinifera vines, the production of 45,000 cases of wine, the running of two wine shops and the marketing and sales of two brands – CedarCreek Estate Winery and Greata Ranch Vineyards.

Gordon is a member of the founding Board of Directors of Destination BC, the industry led Crown Corporation established to promote “Super, Natural British Columbia” to the world.  He also served as Chairman of the B.C. Wine Institute (2004-2006), was a Member of the Minister’s Council on Tourism (2011-2012), was a Director of the Canadian Vintners Association (2002 2014).  In addition he is also a Director of Greata Ranch Holding Corporation (a property development company).  Gordon was the founding Co Chair (2001-2006) of the Okanagan Partnership (a regional economic initiative sponsored by the National Research Council and UBC Okanagan) and a Director of the Economic Development Commission of the Central Okanagan Regional District (2001-2005).  He also served as a Director of the 2010 Vancouver Winter Olympic Bid Corporation.

Prior to operating the family owned CedarCreek Estate Winery (1996 – 2014), Gordon worked 10 years in the mining industry (1986 – 1996), serving as Vice-President, Corporate Relations and Secretary of Viceroy Resource Corporation, a gold company headquartered in Vancouver.  He is also experienced in government having served as Director of Western Operations, Office of the Leader of the Opposition (1990-1991) and as Special Assistant to the Right Honourable Jean Chrétien, Minister of Energy, Mines and Resources/Minister of External Affairs (1983-1984).

Gordon received a Bachelor of Arts (Economics) Degree from the University of British Columbia in 1983 while playing varsity rugby for the Thunderbirds (1980 – 1983).

Dr. Anthony (Tony) Holler
Tony grew up in Summerland, BC, on their family farm which was predominantly apples but included soft fruits and pears. He studied sciences at Okanagan College and moved on to UBC where he received a Bachelor of Science in Biochemistry and a Medical degree. Tony worked at the University Hospital for 11 years as an Emergency Room Physician and was a Clinical Instructor of Medicine. In 1993, Tony and others founded ID Biomedical Corporation (IDB) which was focused on molecular diagnostics and vaccines. In 1999, Tony became the CEO of the company and the company’s focus shifted to the development of vaccine products.

IDB acquired a number of companies including the vaccine assets of Shire Pharmaceuticals. This made IDB a fully integrated vaccine company with expertise in research and development, pilot scale manufacturing, regulatory affairs and commercial manufacturing.

In December 2005, IDB was acquired by GlaxoSmithKline for $1.7 billion, plus the assumption of approximately $300 million of debt. Since the acquisition, Tony has focused on working with a number of companies providing strategic advice and sitting on their boards. He is currently Chairman of CRH Medical Corporation, a NYSE listed medical device company; Chairman of Sunniva Healthcare; Advisory Board Member of Roadmap Capital, a private equity firm focused on late stage technology companies; and a board member of Response Biomedical.

Tony is an avid wine drinker and collector. Over the years, Tony has acquired approximately 5000 bottles from wineries all over the world. His interest in Okanagan wines started in the early 2000s when he starting tasting wines from some of the top producers in the valley.  This lead Tony to believe that the Okanagan is capable of producing world class wines and led to the purchase of Poplar Grove Winery.

Barbara Holler, Tony’s wife, is the Owner and Operator of Holler Estate Vineyards which owns roughly 100 acres of land which is comprised of vineyards on the Naramata Bench and on the Eastern bank of Osoyoos Lake, close to the USA border. The vineyards on the Naramata Bench have a very different terroir (heat units, rainfall, soil composition, and farming practices) than the vineyards in Osoyoos.  This allows Holler Estate Vineyards to grow various varietals where they grow best and allows Poplar Grove wines to be made from 100% estate gown fruit.  Two of Tony and Barb’s sons, Matthew and Andrew, manage the vineyards making sure that the grapes are cared for everyday rain or shine.

Currently, Poplar Grove produces approximately 25,000 cases per year. Poplar Grove will shortly begin the strategic planning for the next 10 years (2017-2027).  Poplar Grove is an Estate Winery and the goal is to be a multi-generational business.

Poplar Grove is focused on the same business practices which Tony has used successfully in other businesses; high quality products, high quality people, high quality facilities, an achievable business plan, access to capital and a continuous focus on improvement in all aspects of the business.