Home » Events » UBC Homecoming – Welcome to the New You with Douglas Coupland, DLitt’10 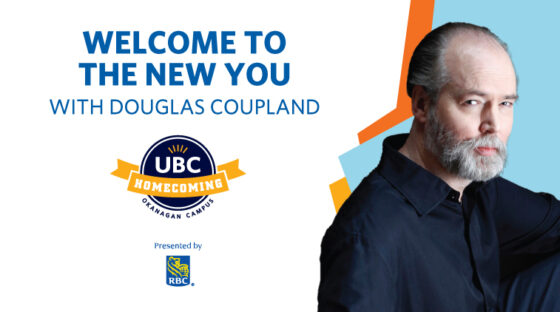 Social media, technology, AI, a global pandemic — what do recent changes mean for today and our future?

You are invited to engage, reflect and reset at the virtual keynote Welcome to the New You with Douglas Coupland, DLitt’10.

We are living in a rapidly evolving digital era – technology has shifted our normal with many of us now feeling we’re juggling too much, working too much, and pushing our limits. Through his novels and media appearances, Douglas Coupland has been a leading commentator on technology’s impact on our society for almost two decades. In this thought-provoking presentation, he unveils some hard-hitting truths about how technology is shaping the way we think. Topics covered will include how our interactions have shifted through technology and the internet, and how technology affects feelings, togetherness, communication, and isolation.

Douglas Coupland is a novelist, visual artist and designer, who became the voice of a generation with his novel Generation X and who has expanded his globally respected perspectives on life, art and technology through his voice and visual works ever since. He expresses what he sees in both low and high culture, technology and its impact on human evolution and our existence. Douglas is widely viewed as one of the ‘most original commentators on mass culture of the late 20th and the 21st century.’

Since 1991 Coupland has written thirteen novels published in most languages. He has written and performed for England’s Royal Shakespeare Company and is a columnist for The Financial Times of London. He is a frequent contributor to The New York Times, e-flux, DIS and Vice. Coupland is a member of the Royal Canadian Academy, an Officer of the Order of Canada, an Officer of the Order of British Columbia, a Chevalier de l’Ordre des Arts et des Lettres and receiver of the Lieutenant Governor’s Award for Literary Excellence. In 2010, Coupland received an Honorary Degree from the University of British Columbia.

Return to the Homecoming schedule