For decades women have been fighting for workplace equality, and in many sectors, progress has been made. But in boardrooms and executive offices across the country, there remains a noticeable absence of women in senior leadership positions. What lies behind this gender imbalance? Is it due to deeply-ingrained biases by those making the appointments? Or are some women choosing to forgo leadership opportunities for career paths that offer greater flexibility?

This event took place on September 9, 2014, in downtown Vancouver.

Presented in partnership with Forum for Women Entrepreneurs (FWE).

Gloria Macarenko is the host of Our Vancouver, a current affairs television show on CBC Television. She is also host of The Story from Here, a national Radio One show which brings Canadians the most lively and intriguing interviews from across the country. She is a familiar guest host on CBC Radio One’s On The Coast in Vancouver.

Previously, Gloria hosted the award-winning newscast CBC News Vancouver at 5 & 6. She has twice been nominated for the Gemini Awards in the category of “Best News Anchor” in Canada.

Gloria herself is an award-winning journalist and senior leader on the news team. In her many years with CBC, she has been awarded a Jack Webster Award for “Best News Reporting”, multiple RTNDA Awards and a Leo award for “Best Anchor in a News Program” with former co-host Ian Hanomansing. Gloria has guest hosted on The National and CBC News Now, as well as local radio shows The Early Edition and B.C. Almanac. From her extensive coverage of the Sochi Olympics, as much a news story as a sports story considering the numerous human rights issues that dominated the Games, to profound interviews with local families affected by the Right-to-Die legal challenge, and families who looked to the courts for justice after losing loved ones to a drunk-driving accident, Gloria has the ability to touch the heart of audiences no matter how challenging the story.

Gloria’s relationship with the Vancouver community goes far beyond the newsroom. You can see her volunteering and hosting for organizations such as Arts Umbrella, Dr. Peter Centre, RCH Hospital Foundation, BC Cancer Foundation, the Gordon Smith Foundation, Cystic Fibrosis Canada and the International Women’s Forum.

During her downtime, you will find Gloria enjoying a good book or sampling the spectacular culinary adventures Vancouver is known for.

Jennifer L. Berdahl is the Montalbano Professor of Leadership Studies: Women and Diversity at the University of British Columbia’s Sauder School of Business. Prior to UBC, Berdahl was a professor at the University of Toronto’s Rotman School of Business and the University of California Berkeley’s Haas School of Business. Professor Berdahl has studied gender in organizations for more than 20 years with over 40 publications to date. Her research has examined power and status in work groups, workplace harassment and discrimination, and the work/family interface. Professor Berdahl is an award-winning MBA teacher. Her research and expert opinions are regularly featured in the media, including The Globe and Mail, The New York Times, The Wall Street Journal, Forbes, and The Atlantic Monthly, and national TV and radio programs. Professor Berdahl has served as an expert witness on gender discrimination cases in the U.S. and Canada and has provided testimony for the Canadian Senate and House of Commons.

Maninder is the Vice-President of Pacific Autism Family Centre Foundation. Previously, she served as the Executive Director of Tradeworks.

In 2012, Maninder was nominated for a YWCA Woman of Distinction Award. And in 2013, she was recognized as one of Business in Vancou­ver magazine’s “40 under 40” top business achievers.

She graduated from UBC with a Masters’ degree in Electrical Engineering, specializing in data mining and artificial intelligence algorithms. She is a graduate of Harvard Business School’s Executive Education Program.

Maninder believes three things passionately – if you are not living on the edge you are using up too much space, stereotype is never the person, and human potential is a terrible thing to waste. She can found on Twitter at @dhaliwalmk. 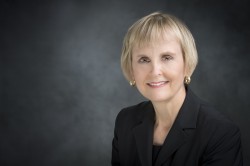 Anne was President of Weyerhaeuser Company Limited from 2008 to June 2014. Previously, she served as Weyerhaeuser’s Canadian General Counsel.  She holds a BA from SFU (Economics), LLB from UBC, and LLM from Cambridge University (Trinity Hall).

Anne is the Chancellor of Simon Fraser University (June 2014). She is a current or past member of several boards including Thompson Creek Metals Company Inc., Sustainable Forestry Initiative Inc., the Forest Products Association of Canada, Council of Forest Industries, the Alberta Forest Products Association, PEN Canada, the Vancouver Writers Fest, the Writers Trust of Canada, and the Board of Governors of Simon Fraser University.

In 2011, she received the Robert V. A. Jones Award recognizing leadership in corporate counsel practice and exceptional contributions to the Corporate Counsel bar or community, and was named one of Canada’s 25 most influential lawyers. In 2013, she received a Queen Elizabeth II Diamond Jubilee Medal and a Lexpert Zenith Award. In 2013-14, she served on the Government of Canada’s Advisory Council for Promoting Women on Boards. Anne is the author of two novels, both published by HarperCollins, and is completing her third.

John Montalbano is CEO of RBC Global Asset Management, the asset management division of Royal Bank of Canada (RBC), a position he has held since May 1, 2008 when RBC acquired Phillips, Hager & North Investment Management Ltd. (PH&N). RBC Global Asset Management invests $320 billion for individuals and institutions, primarily from offices in Canada, the United States, the United Kingdom and Hong Kong. John is also a member of the Operating Committee of RBC Wealth Management, one of the five business segments that define RBC.

John began his career in 1987, when he joined PH&N as an equity analyst and subsequently assumed successive leadership roles within the firm, culminating in his appointment as President in 2005.

John holds a Chartered Financial Analyst designation and a Bachelor of Commerce, with Honours, from the University of British Columbia (UBC), and he is a Leslie Wong Fellow of the UBC Portfolio Management Foundation. John is Chair of the UBC Board of Governors and supports the UBC Sauder School of Business in a number of capacities: as a member of its Faculty Advisory Board; as a member of the Advisory Board of the Phillips, Hager & North Centre for Financial Research; and as a founding advisor to the Sauder Philanthropy Program, an initiative that fosters philanthropy leadership skills among young business students who are committed to community service.

In keeping with his commitment to developing talented youth in Canada, John has established several fellowships at the University of Victoria in Ocean and Earth Sciences and at UBC in International Relations and Law. John is a trustee of the Killam Trusts, an organization largely devoted to supporting scholarships at the graduate and postgraduate levels for top scholars at five Canadian institutions. In this capacity, he serves as a member of the Investment Committee for the Canada Council for the Arts. In addition, John also serves as a member of the Emily Carr University Campaign Cabinet. John also promotes opportunity for people facing various types of challenges: He is an advisor to the Take a Hike Youth at Risk Foundation (which he helped found) and to the Power to Be Adventure Therapy Society. He also has had a close association over time with the BC Down Syndrome Research Foundation and served as its Honorary Chair in 2012.

John actively supports other community-focused organizations as well. He is a member of the Science World Chairman’s Council and was formerly Co-Chair of the Community Arts Council of Vancouver’s Community Arts Fund.

Dr. Piper currently is a member of the Board of Directors of the Bank of Montreal and TransAlta Corporation.  She also serves as a board member of CARE Canada, the Dalai Lama Center for Peace and Education, and the Canadian Stem Cell Foundation.

The recipient of 17 honorary degrees, Dr. Piper is an officer in the Order of Canada and a member of the Order of British Columbia.  She was named Educator of the Year by the Learning Partnership in 2004, was appointed an Honorary Fellow of Merton College, Oxford University in 2007 and elected a Fellow of the Royal Society of Canada in 2008.