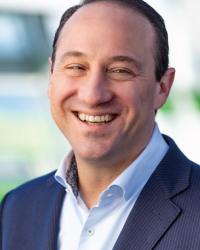 Mauro Manzi is Chief Commercial, Retail and Wealth Officer at Coast Capital Savings. He has over 25 years of experience in financial services with a background combining Executive Leadership roles in Commercial, Business and Retail Banking.

Mauro actively contributes to a number of charity and non-profit organizations through community board positions. He recently served as Secretary and Treasurer for the United Way of the Lower Mainland having also led the Campaign Cabinet prior to joining the Board. He is currently President of the Famiglia Bagnolese Society where he works to promote education, social activity, youth engagement, sports, and fine arts within the Bagnolese community, and has served as a board member for the Merrymount Children’s Centre, The Surrey Board of Trade, and the Vancouver Society of Children’s Centres.

Mauro also puts his Provincial Soccer Referee License to good use as referee for the Fraser Valley Men’s Soccer league. He resides in Surrey, BC, with his wife Luisa, and their two children aged 17 and 15 years.